Lyft’s I.P.O. Was a Huge Success, Just Not for Investors Who Bought on Friday

Home/Uncategorized/Lyft’s I.P.O. Was a Huge Success, Just Not for Investors Who Bought on Friday
Previous

Lyft’s I.P.O. Was a Huge Success, Just Not for Investors Who Bought on Friday 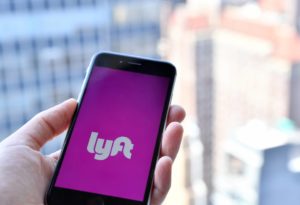 Major Domus Venture Partners makes 1.7x profit in 12 months on its Lyft position by investing before the IPO was announced.

Lyft’s stock market debut has set up its founders, employees, early backers and even those who scored shares in the initial public offering Thursday night for quite a windfall.

But not everyone who invested in the company is reaping the spoils.

Shares of the ride-hailing company rose nearly 9 percent on Friday. At over $26 billion, Lyft’s market value is almost double what private investors valued it at less than a year ago.

But Lyft’s first-day gain is measured off the I.P.O. price (which was set on Thursday, when shares were divided up mostly among large funds). Ordinary investors who wanted in had to wait to buy the stock until it was available on public markets on Friday, and at a much higher price than the big funds paid.

And those who bought as soon as trading began are already sitting on losses of a little more than 11 percent.

It serves as an important reminder that amid all the hoopla around trading debuts, small investors wind up taking a lot of the risk. Most of the gains on the first day of trading for a stock are realized with the first trade.

Over the past decade, companies listing shares on American stock exchanges have increased 14 percent from their I.P.O. price, according to Dealogic. But nearly all of the rise has come at the opening trade.

That dynamic has played out in many of the prominent I.P.O.s in recent years. Facebook shares opened 10 percent higher on their first day of trading and then proceeded to give back almost all those gains to finish essentially unchanged for the day.

Etsy was an extreme example of this. Its stock soared 94 percent on its first day of trading, but investors who bought at the open actually lost 3 percent by the close of trading.

And it’s not just tech companies. Levi Strauss recently made its return to the public markets, selling shares to investors at $17 a piece on March 20. The stock opened the next day at $22.22, a 31 percent jump. For the rest of trading that day, though, it climbed less than 1 percent. 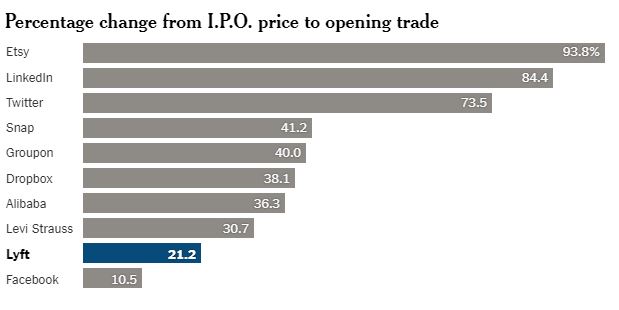 Of course, if Lyft keeps growing as fast as Wall Street hopes it will, or works out how to turn a profit, then even the latecomers could wind up with respectable returns. Facebook shares are up more than 300 percent since their first day of trading, and after Etsy struggled for its first three years as a public company, its shares have more than doubled since they started trading.

Still, not being able to buy at the I.P.O. price also greatly affects returns over the next year. Investors who bought shares at the offering price have averaged a 22 percent increase over the past decade. Returns for those that bought at the open? Sixty percent less.